To London and beyond! – Friendicoes

To London and beyond!

To London and beyond!

Along with their day to day duties, our incredible adoption team have been working on something rather spectacular behind the scenes. After months of planning, it is with joyful hearts that we can reveal two very special adoptions. Desi dogs Fig and Mango will be packing their bags this summer and swapping Delhi for London to live with their hu-mum, Natalie. We caught up with Natalie to hear more about this two-in-a-million story.

Friendicoes: Tell us a bit more about how you discovered Friendicoes.

Natalie : I came to know of Friendicoes through my sister and her husband, who rescued a dog and two cats from the streets when they lived in Delhi. Upon returning to the UK, Jenni and Wolf stayed in touch with the team at Friendicoes. They even eschewed the typical wedding gift registry in favour of donations from guests when they got married last year. Jenni would always share stories from the Friendicoes Facebook page, and we would dream of rescuing more pups from the shelter. With this in mind, I decided to visit the shelter myself. And so last October I flew out to Delhi to spend two months immersed in Friendicoes life.

F: And we’re so happy you came to volunteer at the shelter! Did you arrive with the mindset of adopting a dog?

N: I think everyone else probably knew I wouldn’t be able to come home without adopting a puppy before I did! To start with I honestly thought I’d be able to resist, but all that changed on my first day. 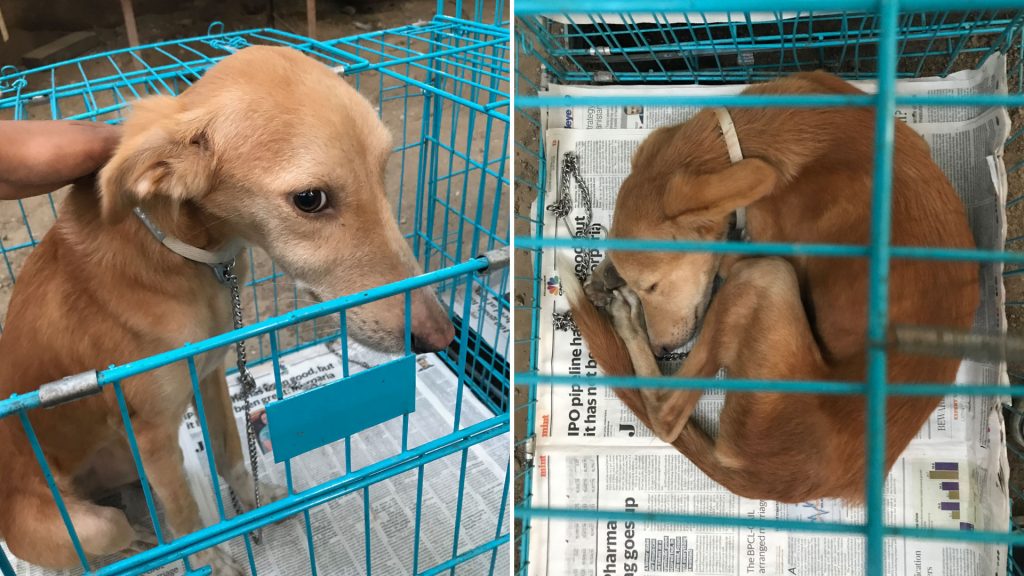 A scared, thin dog not exactly a puppy but neither an adult

Mango was the first dog I saw at the shelter. She had been left tied up in the alley by the park. This was my first taste of one of the many ways dogs arrive at Friendicoes, and of the many cruelties humans are capable of. She wasn’t Mango at the time, just a scared little puppy all skin and bones. The image of her being taken into the shelter with her tail between her legs stuck with me all day. From then on, I would visit her daily. It pained me to leave her after our walks, and she would cry a little too. 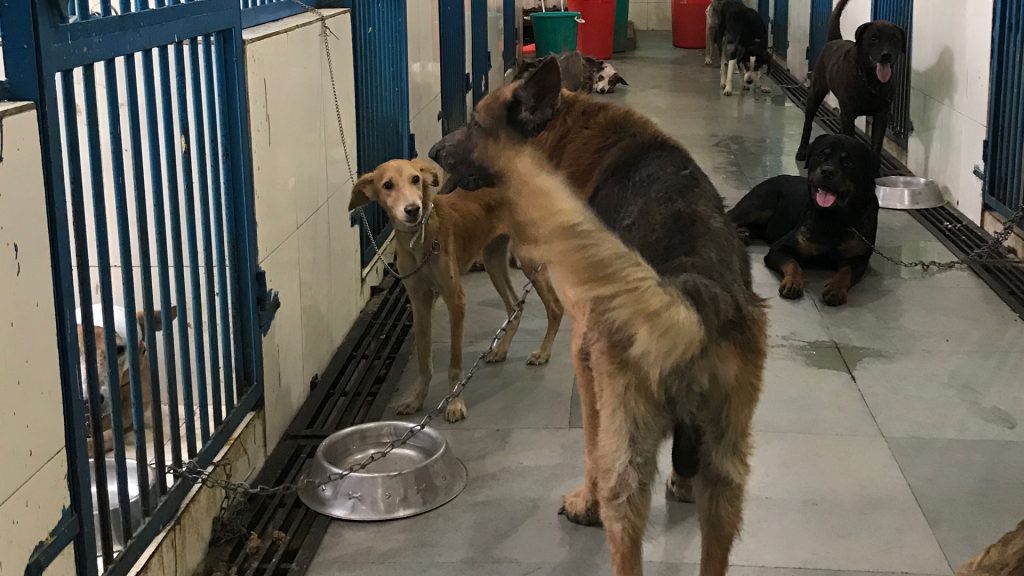 Mango wasn’t a fan of her new neighbours inside

I remember one day I couldn’t find her in the spot where she usually was, and my heart sank. I felt sick, believing that she had died. As I walked through the shelter, something in the back caught my eye. There, amidst the larger breeds was Mango, looking even tinier. When I got to her she actually jumped up into my arms! I carried her out and took her for a short walk, so relieved that she was still alive. 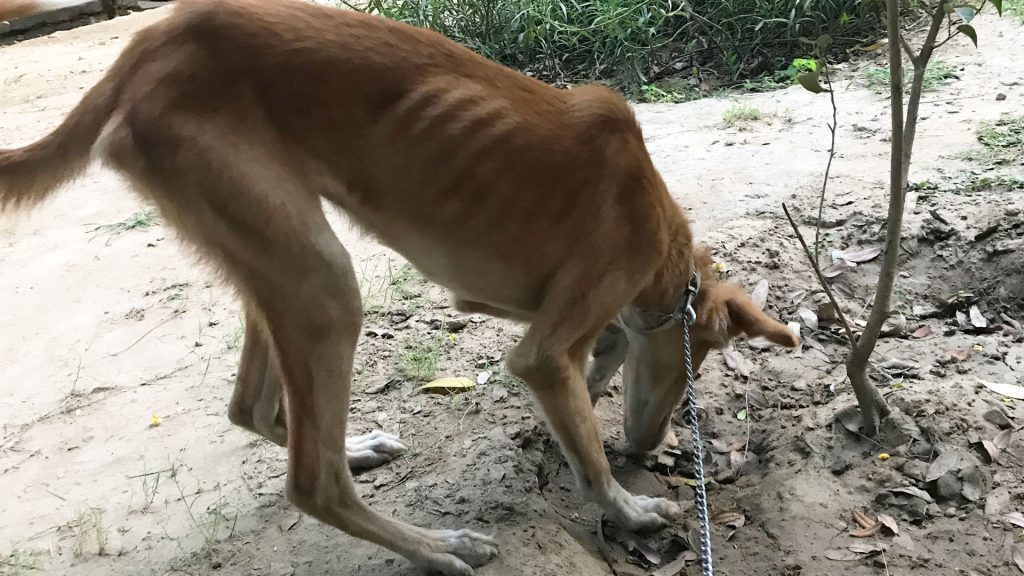 Every new smell was something to be explored

It was my sister Jenni that named her Mango (her desi dog is Peaches, so you can see a theme here!), and while subconsciously I must have known she was mine, I still thought that my life back home wouldn’t allow for a dog. I had a cat after all, and wasn’t that enough?

F: What was it that finally made you change your mind?

N: Strangely enough it was the loss of another dog that made me see sense. I’d spent a lot of time with another desi puppy, who I affectionately called Indie. No more than 2 or 3 months old, Indie had a skin infection that had left the skin on his ears bare. Whenever I came to see him, he would scramble to be let out. Like most of the puppies that are abandoned or picked up from the streets, Indie just wanted to be loved. 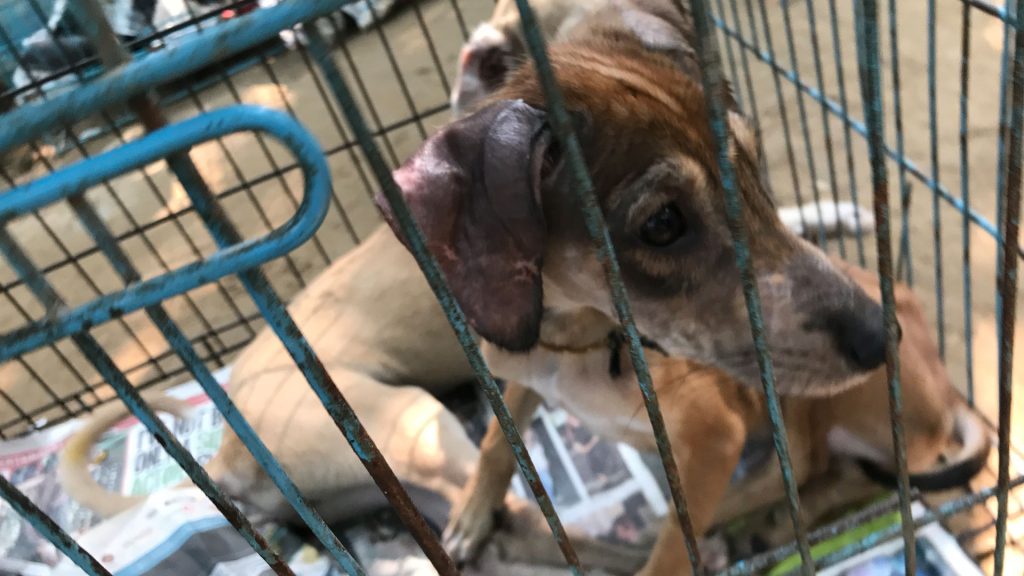 Unfortunately as is all too common at the shelter, Indie contracted Distemper. To give Indie a fighting chance at overcoming the virus, I sponsored his treatment. But the serum is not a cure, and sadly Indie’s immune system just wasn’t strong enough. 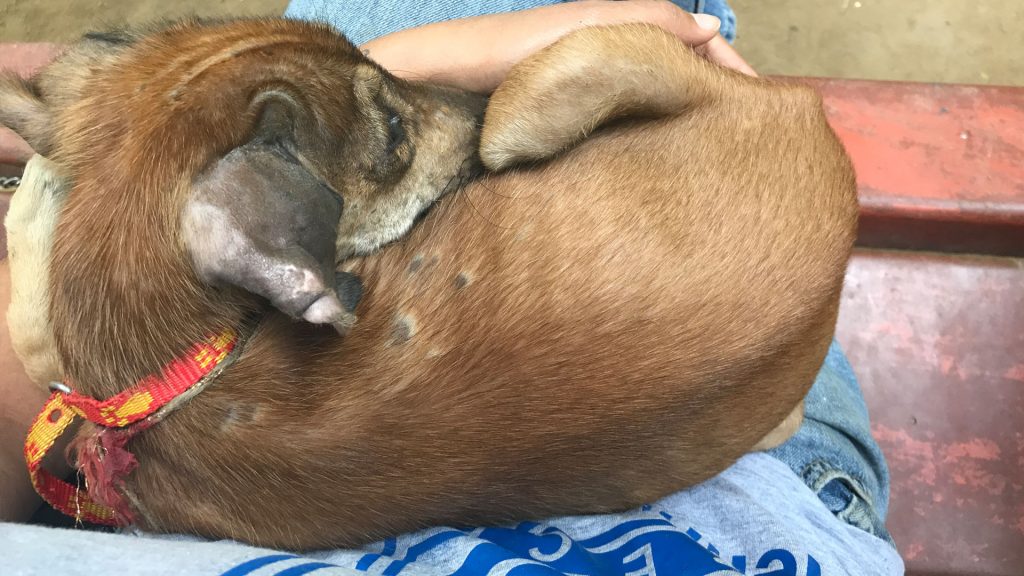 For a week I would sit with Indie for 2 hours everyday, hoping the sun and fresh air would help him fight the infection. I’d read an article that recommended raw organic honey, so I would try and coax Indie with dog treats dipped in honey. I was advised that exercise was also an important factor in beating distemper, so I would try to get him to walk a little. I wanted to try everything and anything. Everyday he was weaker and in more pain, and about a week into the serum treatment I realised he wasn’t going to get better. 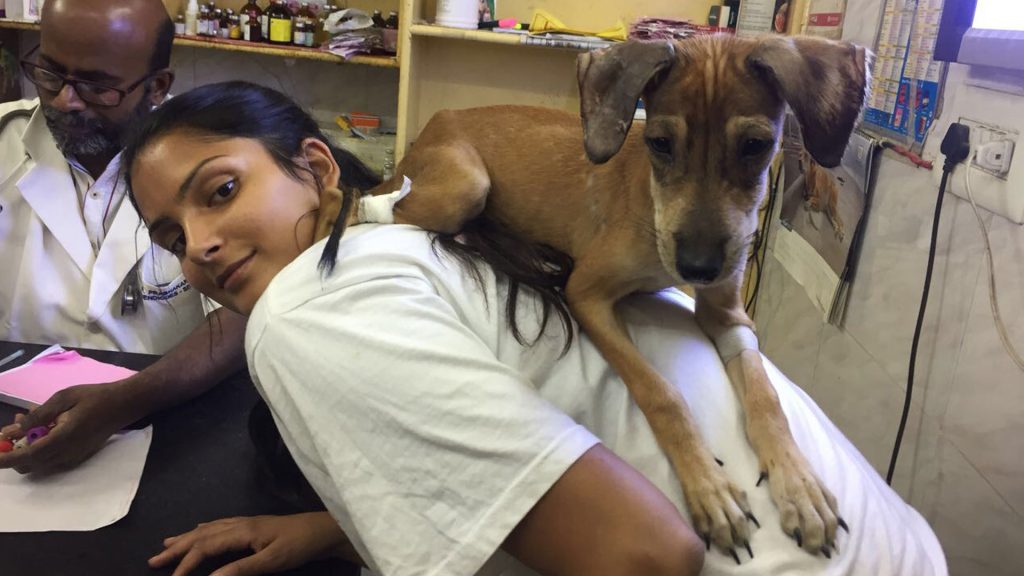 Checking in with the vet, hoping for the best but prepared for the worst

Indie’s death broke my heart, but it also snapped me into action. After seeing Indie suffering so much, the thought of Mango succumbing to a similar fate was unbearable. I had to get Mango out of the shelter and into fostering. We couldn’t move Mango into the Friendicoes fostering unit until we were sure she was 100% healthy and infection free, so the next step was a full health check at the clinic. 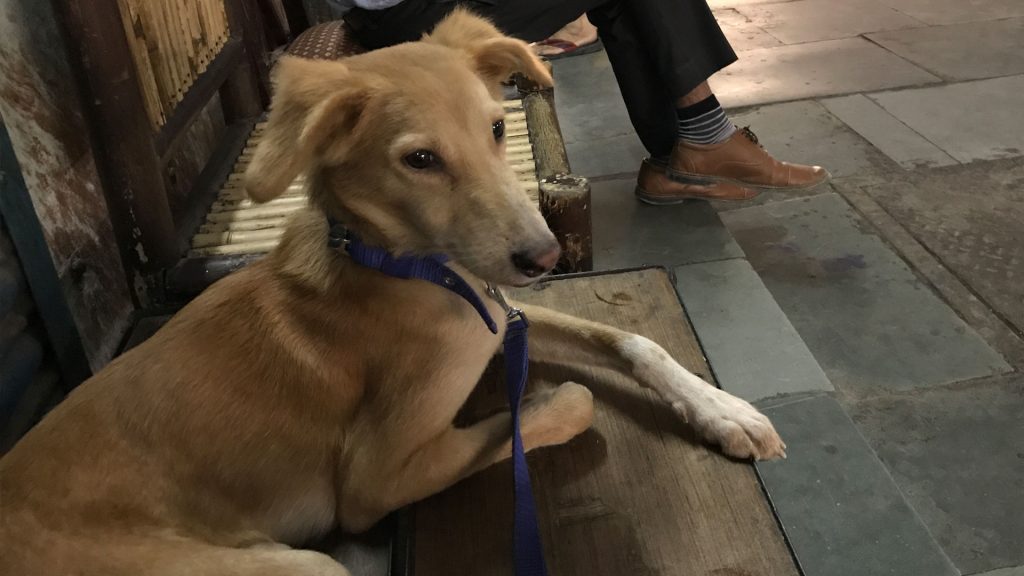 F: How did you feel when you got the results back?

N: Elated! Just before Mango’s health check she has been on a fluids drip due to loss of appetite, which can be a pre-cursor to distemper. I think I was mentally preparing myself for more bad news, so when I found out she was in good health I was over the moon. We had to give Mango a medicated bath before she could be introduced to the other dogs at the fostering unit. She was so well behaved, which of course made me feel like a real proud parent! 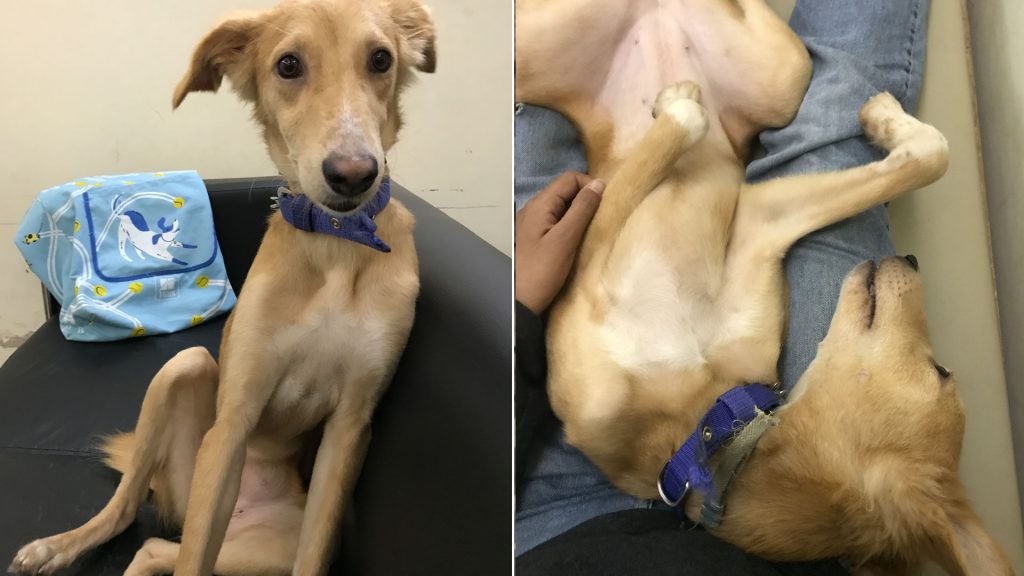 Mango at the fostering unit, squeaky clean after a medicated bath

The time came for me to fly back to London. Saying goodbye to Mango was tough, especially as I knew the road ahead wasn’t certain.

F: When you returned to London, you were only due to adopt Mango. At what point did Fig come into the equation?

N: Well, I first met Fig when I was shadowing one of the resident Friendicoes vets on his nightly street dog feeding rounds. Shy and nervous, Fig had just appeared out of nowhere and we felt sure that he was probably an abandoned pet rather that a full street dog. 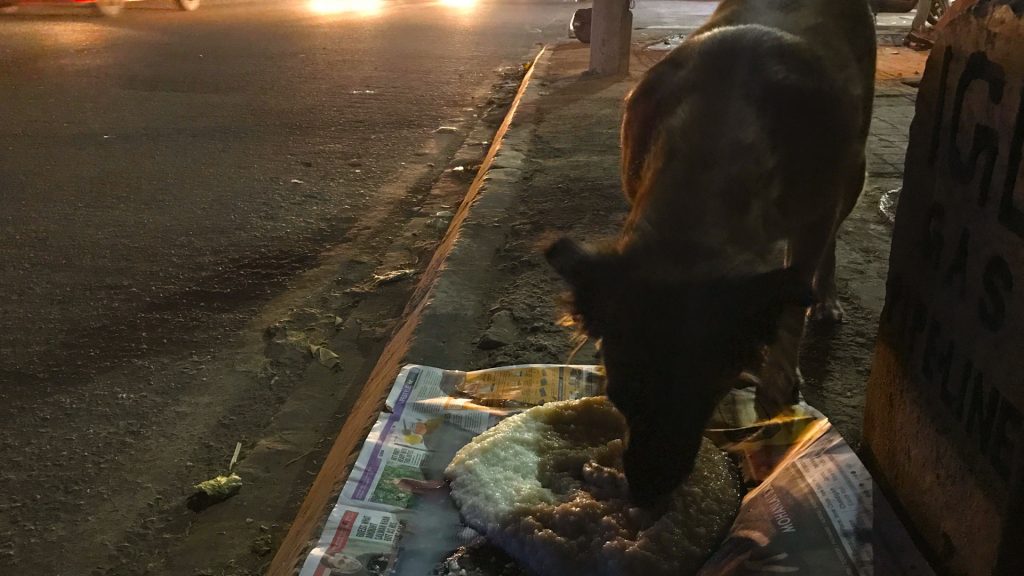 A lone dog, Fig had no pack and no home of his own

I think I first saw that Fig had been included in the adoption programme on the Friendicoes Instagram account. He looked so earnest and handsome! When Tandrali, the hero behind the adoption programme, told me that Mango and Fig were sharing a kennel and had become firm friends, it was a done deal. I would find a way to bring Fig home too. I often wonder if Tandrali named named Fig after a fruit to send me a subliminal message! 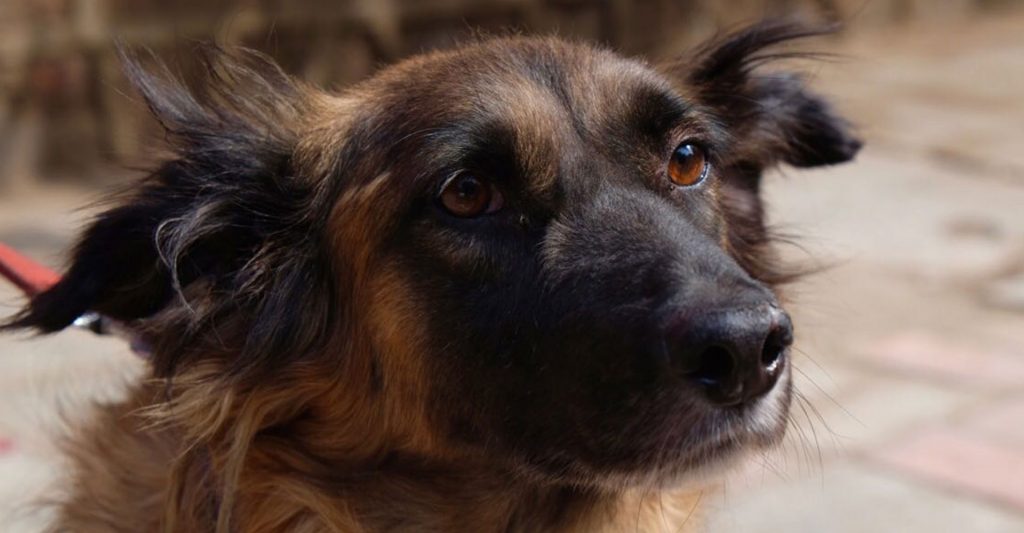 Still a little nervous, but coming out of his shell more and more every day

F: That was back in December. What’s been happening since?

N: Deciding to adopt Fig and Mango was the first step. But it’s not as easy as simply saying yes. Both the dogs had to have rabies vaccinations. After 30 days, blood samples were sent to a UK lab for the tyter test, which determines whether the dogs have built up sufficient rabies antibodies to enter the UK. When a sample is approved, you still have to wait a further 90 days before the dog can leave India.

Well, the path of true love never does run smoothly. Fig passed first time, but Mango’s tyter failed. As any parent will tell you, that didn’t deter me. Although it meant another booster rabies shot, another 10 days wait before the second could be sent, and another round of payments, we went ahead. The weeks that followed was tense. Not for the first time in this process I felt I was mentally preparing myself for the worst. After a particularly stressful day in London, Tandrali told me that Mango has cleared the second tyter, and I was so relieved that I cried! 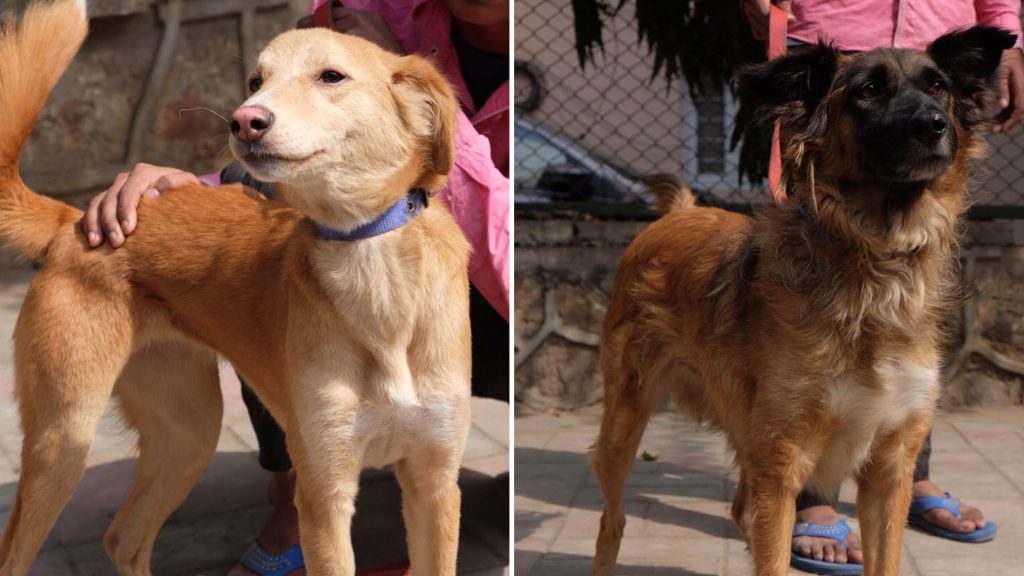 Happy and healthy, Fig and Mango have totally transformed at the fostering unit

This summer I will finally be able to bring Mango and Fig home. We’ve had to jump through a lot of hoops, and there’s still a way to go yet. There’s still boarding costs to cover for the next three months, and flights to arrange and pay for, and a million and one other small things that I could worry about. But it’s also true that desi dogs, especially adults are near impossible to re-home, and so end up in the shelters or on the streets to fend for themselves, where more often than not they meet terrible ends. Knowing that I can save the lives of these two and give them a loving forever home is enough to quickly quash any fears!

F: We can’t wait to see photos of Fig and Mango in London!

Natalie has already spent over 60,000 INR ($900 USD) for their tests, vaccines, micro chipping, vet visits and Friendicoes has borne the cost of their boarding so far for last 3 months. But we could do with some help for their boarding for the next 3 months plus their ultimate flight expenses. While Natalie will be bearing the bulk cost of the flight expenses we would like to support her if possible by sharing some of the finances hopefully with some help from you. Any contributions over and above the boarding cost of total 54,000 INR (300 per dog/day) for next 3 months will be kept aside for the flight expenses in June.

If you’d like to sponsor Fig and Mango’s journey, please visit our online donation page. Once you’ve completed your donation, please drop us an email at tandrali.friendicoes@gmail.com to let us know. That way we can make sure your contribution is reserved for Fig and Mango.