The unsung heroes of Friendicoes

The unsung heroes of Friendicoes

A dog or a cat has the oomph factor on their side. Everyone gushes over them and is ready to take up cudgels on their behalf. The vets treating them are rightly revered and even made famous by people whose pets they have saved. Or the stray they rescued. But not many spare a thought to the thousands of horses, mules and donkeys who slog through life and are deprived of basic needs like a full belly, drinking water or medical care. In fact, most of them are whipped and prodded to work through sickness, injuries and old age.

The Friendicoes Mobile Equine Clinic is a small effort towards righting these wrongs the neglect and injustice meted out to these battered and mistreated animals. Under this program, Friendicoes looks after 1500 working equines between 30 stands and brick kilns of Delhi, Uttar Pradesh, Haryana and Rajasthan. The programme also indirectly helps all those families who depend on their horses, mules and donkeys to earn a livelihood. Unsurprisingly some of these animals support families of up to seven to eight people and even more. 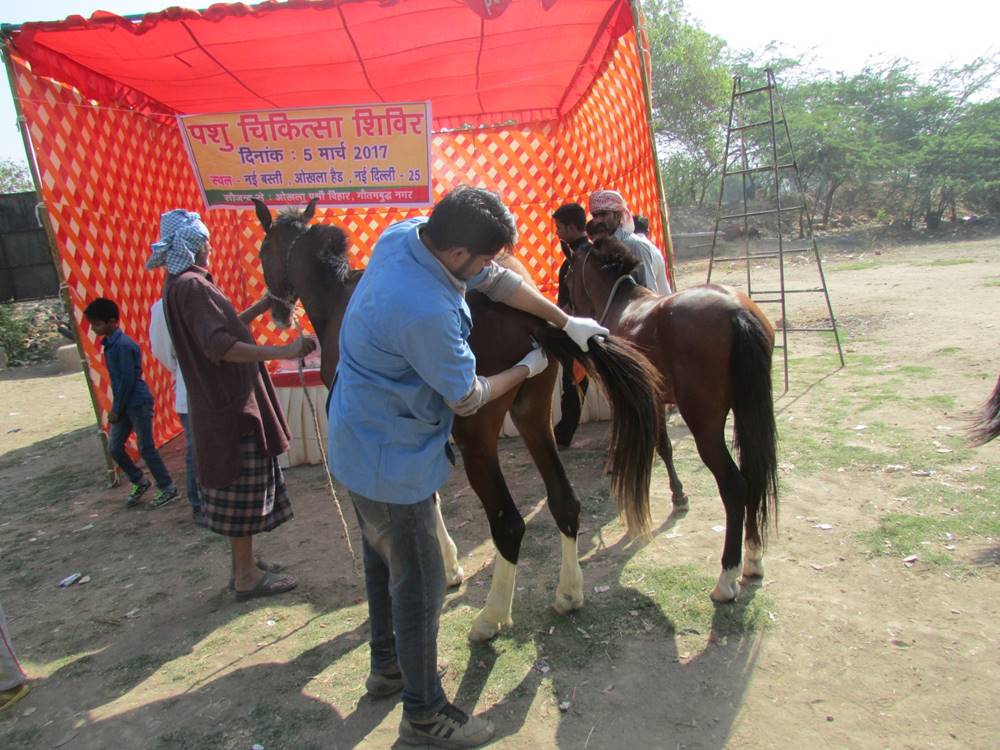 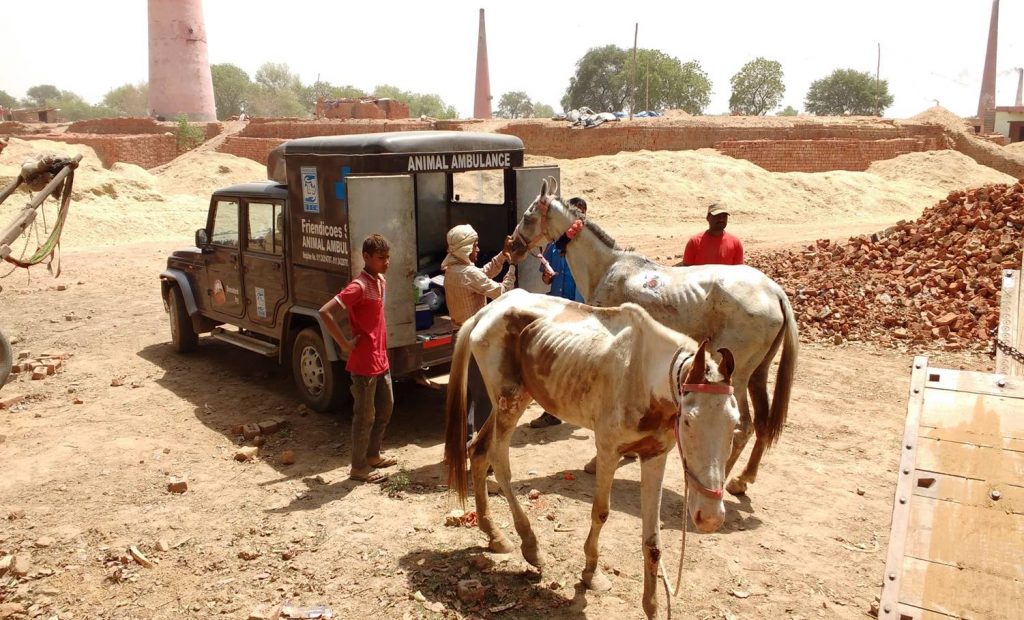 Started way back in 1984 for the working equines of Delhi, the equine welfare program was expanded to other states like Haryana and Uttar Pradesh in the year 2000 after a collaboration with the Brooke Hospital for Animals, UK.  The collaboration ended in 2005 with each deciding to go its own way, with Brooke focussing mainly on education and awareness while Friendicoes considered medical assistance to the animals as a priority along with educating the owners. Over the years the work has increased and so has the team expanded. 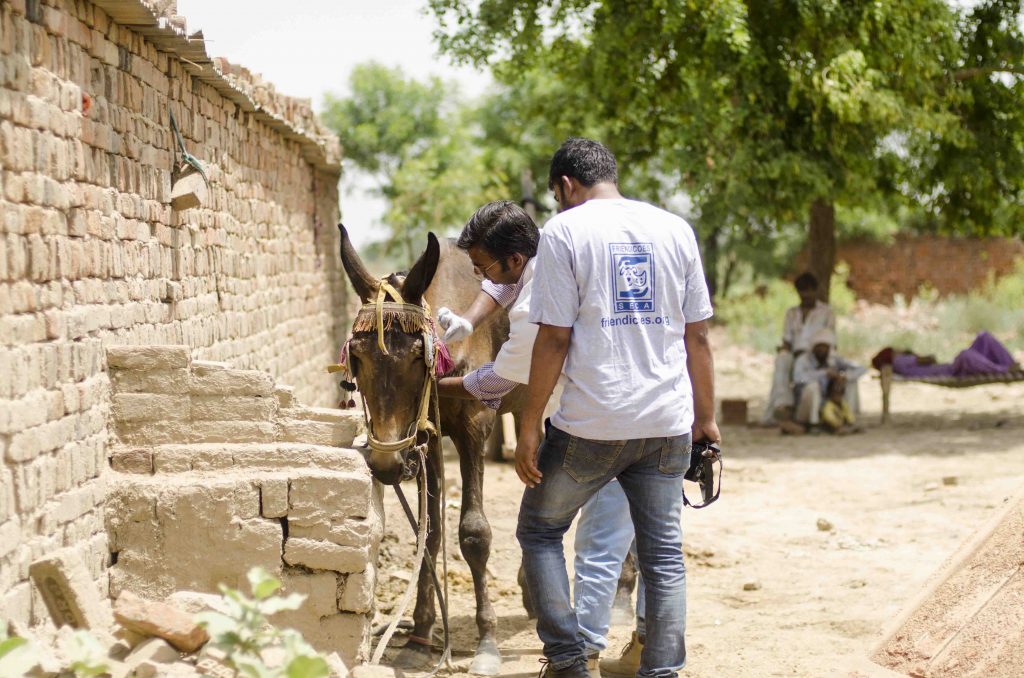 Today the team is led by a very hard working, compassionate and modest veterinarian Dr Akhilesh who is assisted by senior paravet Abbas, who is one of Friendicoes’ star workers, his brother, Akbar, who is the driver and four field paravets who help reach out to the maximum possible cases. Ironically, three of the four field paravets are ex-equine owners who joined our team after their equines retired or passed on. Instead of going back to earning their keep through another animal they chose to help the animals in their area after training with Friendicoes. Zaheer in Jewar, Shakir in Agra and Nawab in Mathura-Vrindavan are the ex-equine owners turned paravets who now help the team look after the animals in their respective localities. 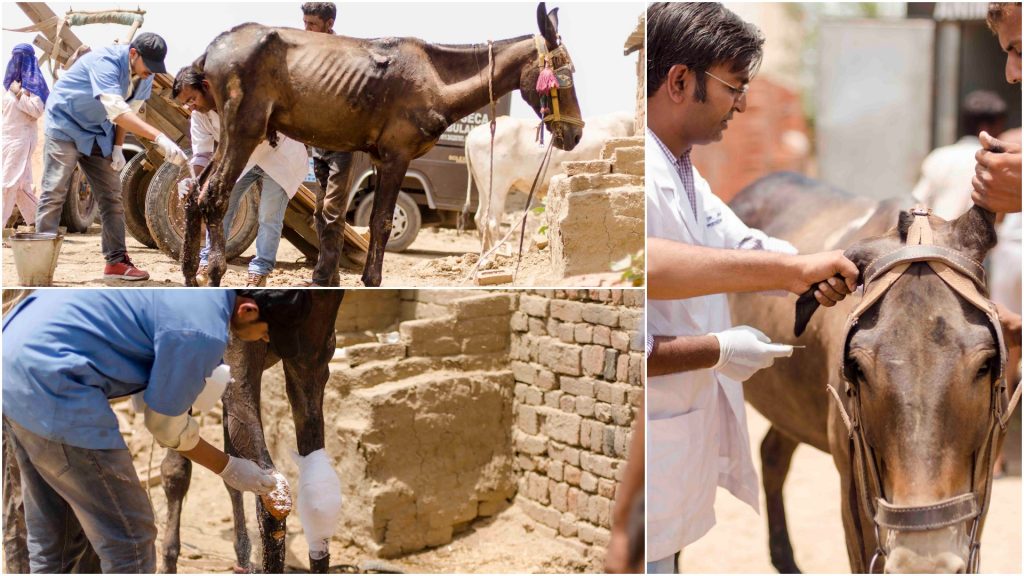 The Mobile Equine team spends six days a week on the road, going from place to place treating sick animals and educating the owners on taking proper care of their animals. The job is hard, dusty and physically very exacting. The team drives through some really rough roads in rural areas covering up to more than one thousand kilometres every week, navigating terrible traffic and work in harsh weather conditions (with the temperature rising as high as 47 degrees centigrade in summer) to reach these animals and help them. 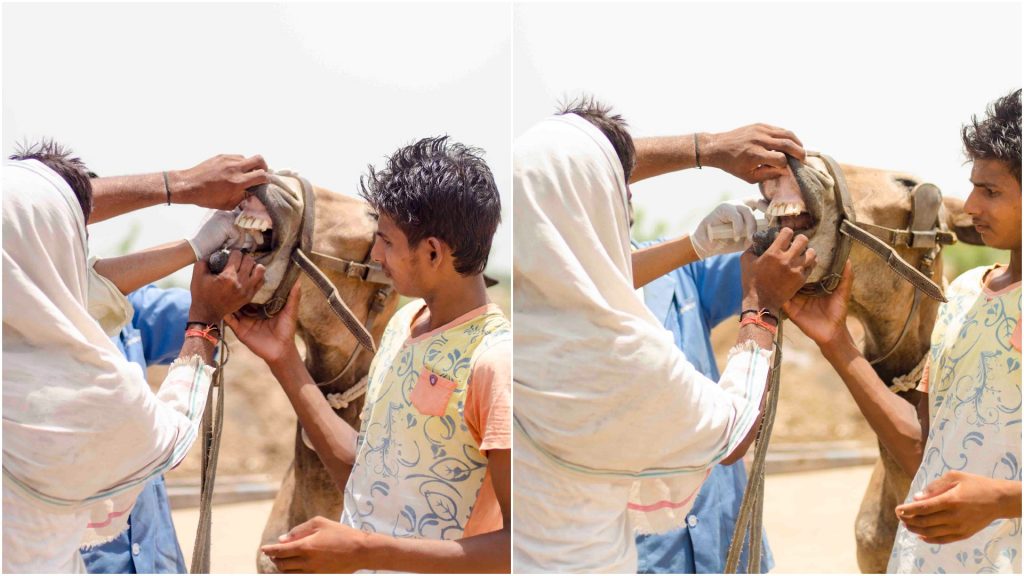 A typical week begins on Monday spent in the Shahdara, Seelampur and Turkman gate areas of Delhi. These visits mostly cater to the tonga (horse drawn carriages) stands in the area. Since the equine team has been catering to these stands for eleven odd years on a regular weekly basis, the locals in this area are well aware of the services being provided and people often come from much farther away to avail treatment. Almost all stands have equine owners coming from a distance of ten kilometres radius and availing of the services provided by the equine team. Over the week the team travels to Gurgaon, Faridabad, Ballabgarh, Jewar, Mathura, Bharatpur to Agra, covering many big and small stands in between as well as attending to any new emergencies in Delhi. 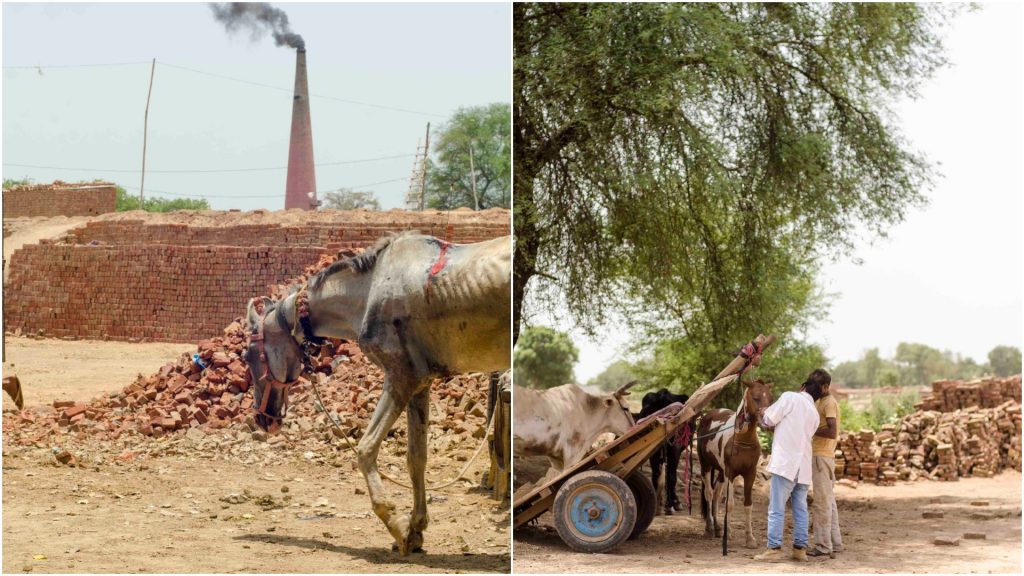 The team sees a minimum of 25 to  30 cases each day, with over 50 cases in the brick kilns during season. Every week the cycle is repeated, providing first aid, treating chronic cases and providing help to animals hitherto at the mercy of quacks and home remedies. The cases attended are enough to make a gentle heart faint. Broken bones that have healed improperly, or multiple breaks in the same area due to improper healing are commonplace, so are burn marks from hot iron rods, a common home remedy applied to broken bones. The worst part is that the animals still are made to work through all these injuries. The equine team tries to provide proper treatment for these animals and offer them some comfort in a life full of gruelling hard work and neglect. Apart from medical assistance, the team also distributes soft-pad saddles made of cloth for the pack animals, farriery service, blankets in winter, shade and shelter wherever possible, troughs to make drinking water easily available as well as educating and sensitizing the owners to take better care of their animals.

Poverty makes monsters out of man. And the team faces an uphill task in dealing with the humans more than the animals. Some of the owners work their animals to the ground, while others are very rigid in their belief of the old ways of treatment and often come for help only when the animal is in the last stage and beyond help. Then comes the part where the team has to tell them to let the animal go. “One of our hardest jobs”, says Dr. Akhilesh, “is convincing someone to give up their sole source of income, when we feel that the animal can no longer work. Sometimes even financial remuneration is not enough to encourage them.” In such situations, the team will first try persuading the owner by using societal pressure, asking an elder or respected member of the community for help, then monetary inducement or as the last measure the threat of an official complaint of animal cruelty. 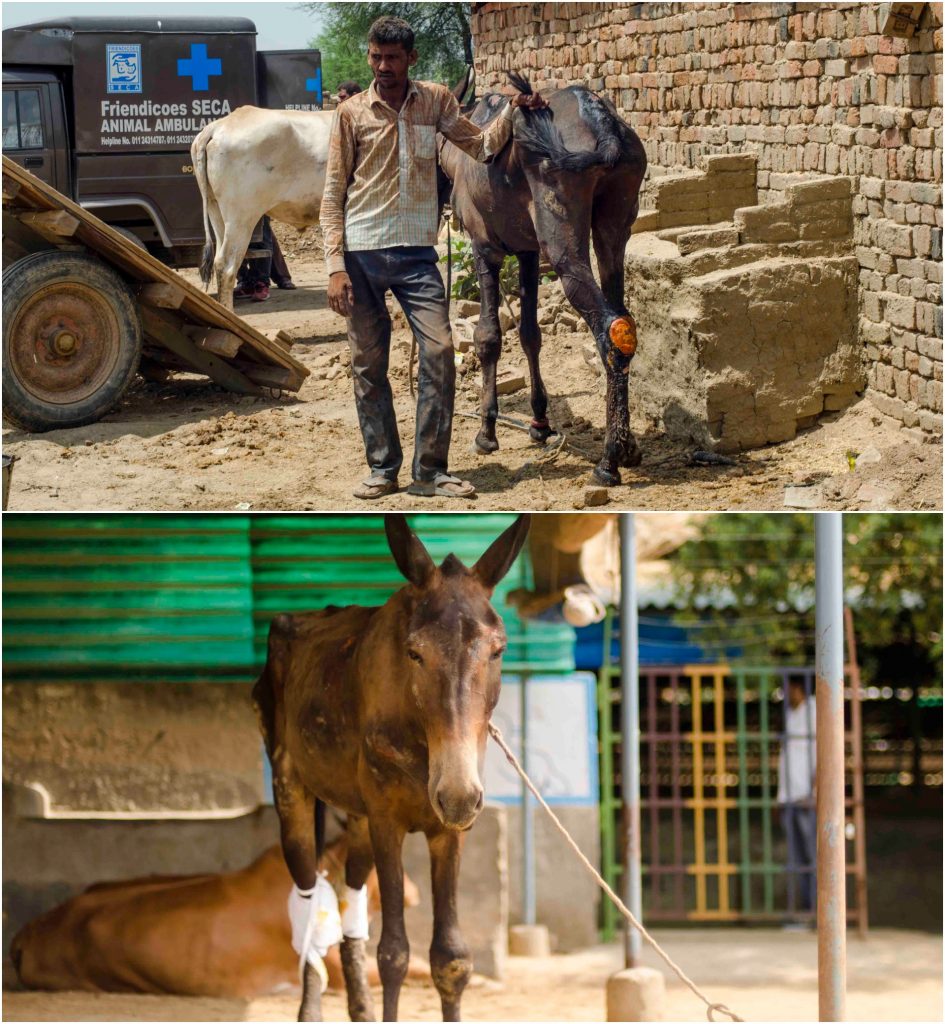 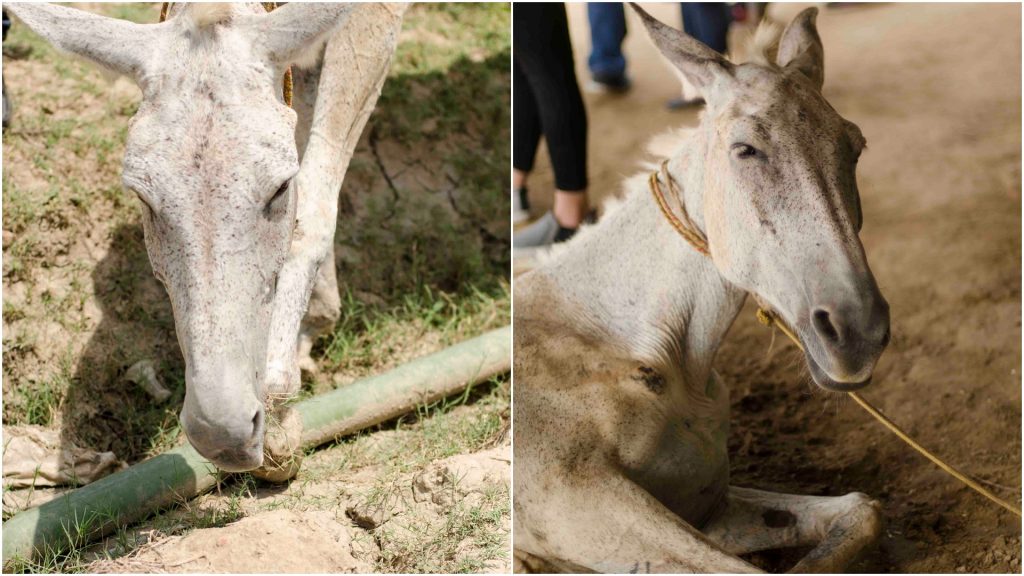