Going Out of Town – Friendicoes

Going Out of Town

Going Out of Town

Friendicoes often receives flak for being too stringent with adoptions or placing too many constraints and conditions. We are often asked why we don’t allow outstation adoptions. 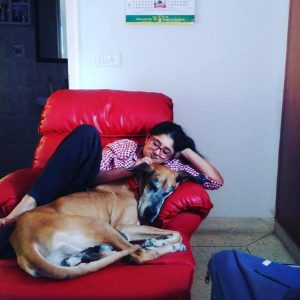 This is primarily because house checks are necessary to ensure a safe and happy home for the animals, plus we also need to be sure that one of our trusted volunteers are around to lend a helping hand in case of any unexpected hitches that may arise. However every now and then we are able to conduct adoptions in other cities solely because of volunteers who have proved their commitment and are ready to go the extra mile to help re-home these precious babies.

This is the story of three such shelter dogs who have found lovely caring homes all the way in Ludhiana. It all started with Heidi, an eight year old Danegirl abandoned outside the shelter by a breeder because she could no longer produce puppies. Heidi had a lovely temperament and surprisingly was not ill when abandoned which often is the case, but older dogs can be particularly hard to rehome, especially such large breeds. We were not very hopeful for Heidi but as we always say, a dog will go where his/her destiny will take them. And Heidi’s road ended at Puneet’s home. Puneet who travels between her homes in Delhi and Ludhiana and whose dogs travel right along with her. 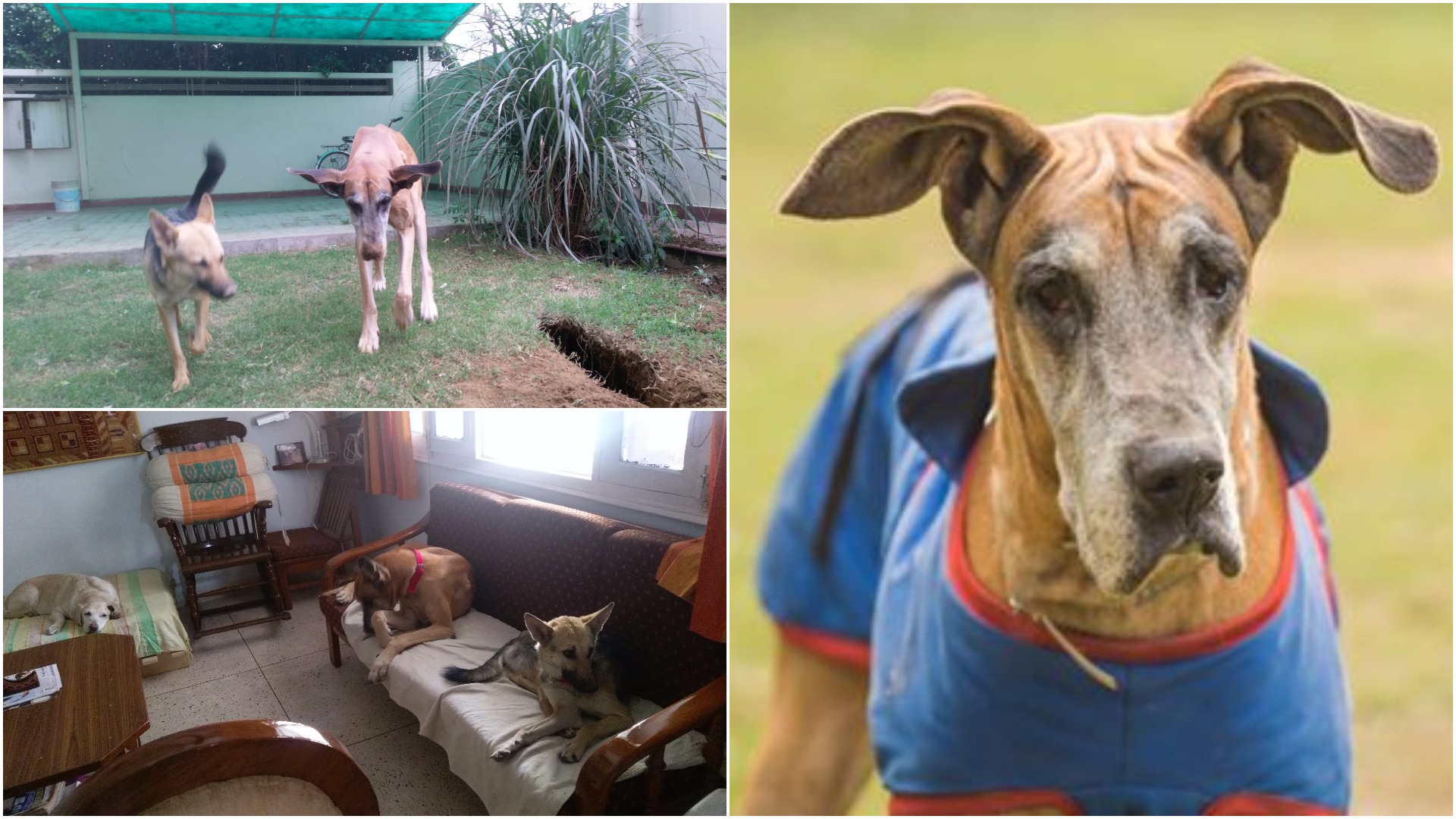 clockwise from right: Heidi at the shelter; Heidi and her housemates did not get along initially; Heidi and Bano, sworn enemies, bond against a common enemy, grass.

After having visited Heidi in her new home and seeing what a happy traveller she had become, we were subsequently able to find two more homes in Ludhiana thanks to Puneet who not only completed the house checks for us but was also  instrumental in finding one of them a home. 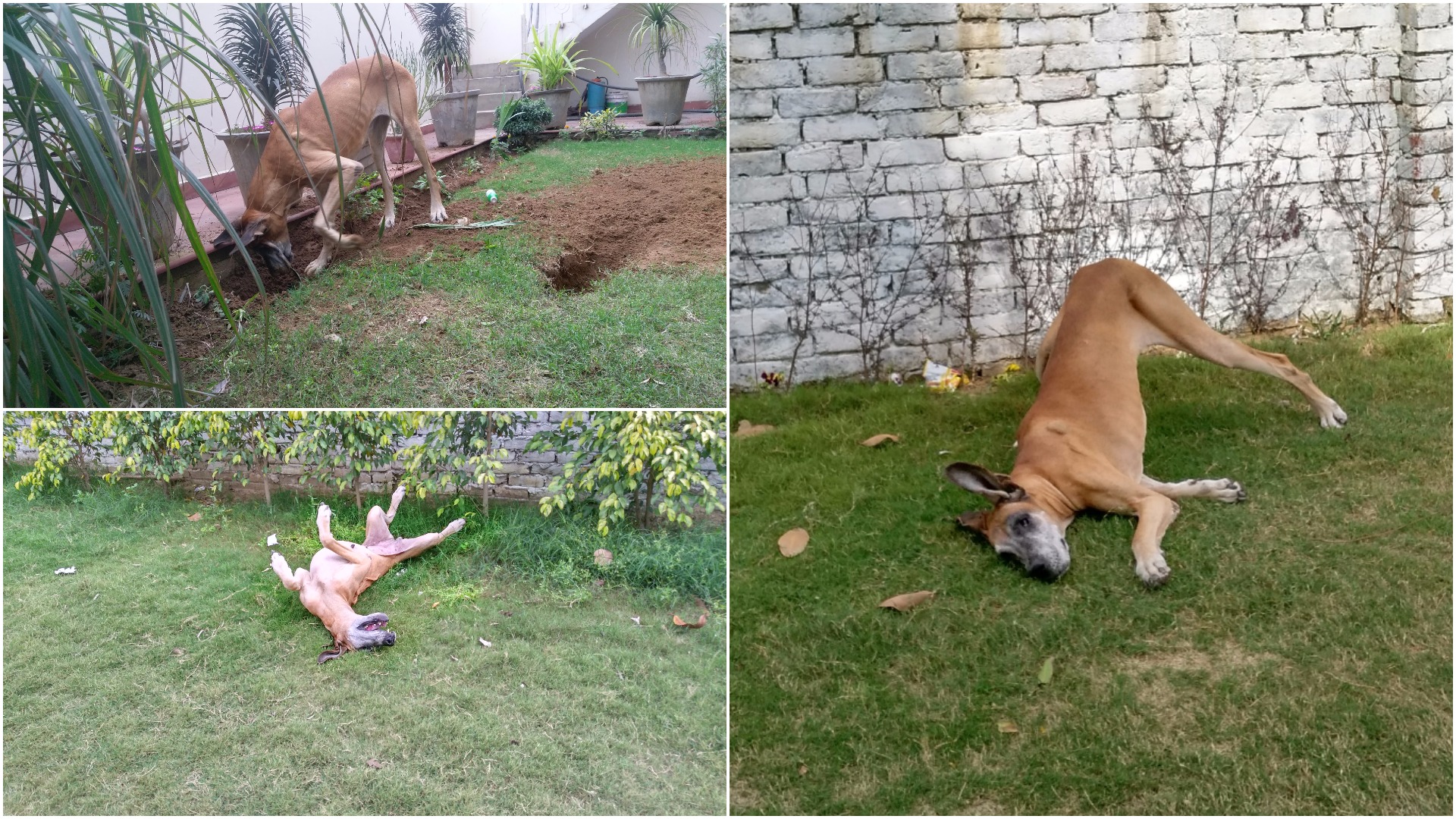 Heidi discovering the joys of country living in Ludhiana 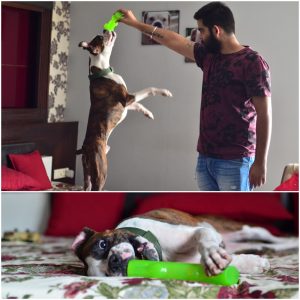 Nasir in his new home.

Today Pyaare, now called Nasir Jones is the centre of attention at his sprawling new home in Rajguru Nagar,Ludhiana thanks to Puneet’s efforts. 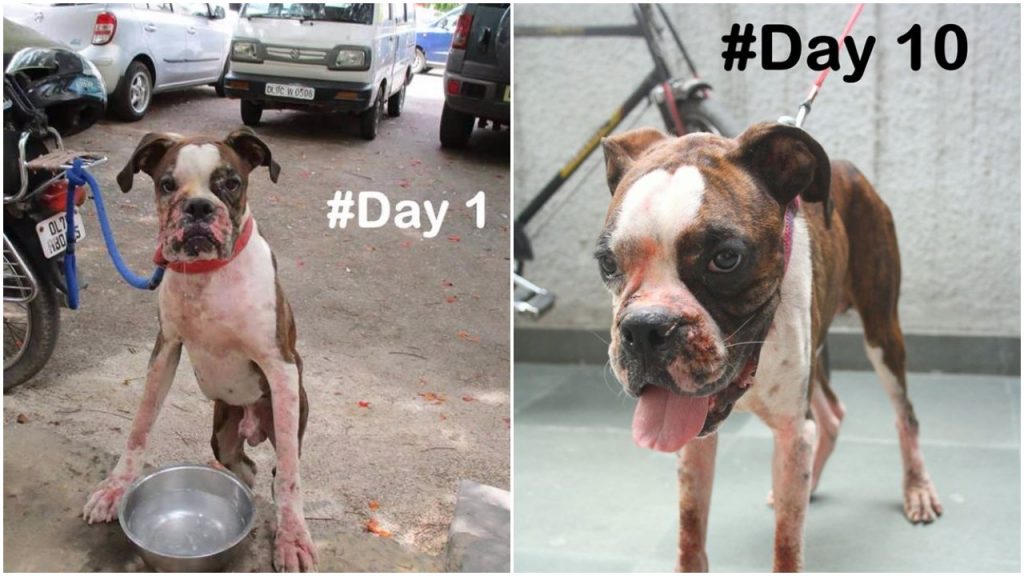 Pyaare when he arrived at the shelter

When Pyaare came into the shelter he was suffering a serious skin problem as well as testing positive for distemper. He recovered from both but then contracted tick fever. During this time when he was fighting through all this like a little champion, Puneet happened to meet him and he touched her heart. So mission Pyaare started and it ended happily with Pyaare finding a doting family all the way in Ludhiana.

The icing on the cake however was Drool, now called Lord Dullu, a black Labrador about 5-6 years old; he could not find a home for the longest time, being unpredictable by nature with food aggression issues. We had lost all hope and it seemed like Drool would be relegated to living out the rest of his years at the Friendicoes sanctuary, when his guardian angel Saru walked in. 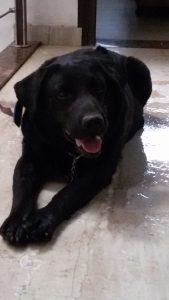 Saru Kaushal, a prominent Ludhiana based artist, is an ardent lover of Labradors, who understood that Lord Dullu’s behavioural issues stemmed from a traumatic past and could be healed with love and affection.Today Lord Dullu reigns over his beautiful home in Green Park, Ludhiana with his two Labrador siblings. He adores Saru and she comes a close third after his first two loves, food & balls. It is food, food and more food for him, followed closely by the ball which he carries everywhere with him and then poor, devoted Saru. But it wasn’t all smooth sailing at the beginning. Dullu bit Saru and there were a couple of more instances where things took an ugly turn but Saru’s love & perseverance won at last. And that is what we want for every abandoned child. Someone ready to give them the time and space to adjust, to overcome their fear and anxiety, someone who is ready to work hard to earn their trust and who is most importantly ready to love unconditionally.

Every dog deserves a chance at happiness and a home which is why we say “adopt. Don’t shop.”