The donkey has been used as a working animal for at least 5000 years. Of the more than 40 million donkeys in the world, about 96% are in developing nations like India where they are used principally as pack animals or for draught work in transport or agriculture. Brick kilns are one of the worst exploiters of donkeys and mules as the work is hard and the animals are used without rest or watering for a good 7 hours at a stretch. India is the second largest producer of clay-fired bricks, accounting for more than 10 percent of global production. There are approximately 100,000 brick kilns across the country, employing around 10 million people, These places are incredibly difficult and cruel places for equines. Animals are forced to carry bricks in packsaddles that weigh up to 150 kg, and in a day will carry up to 3 tons of bricks on their backs without any padding. Many animals suffer horrific wounds and collapse under the extreme loads. 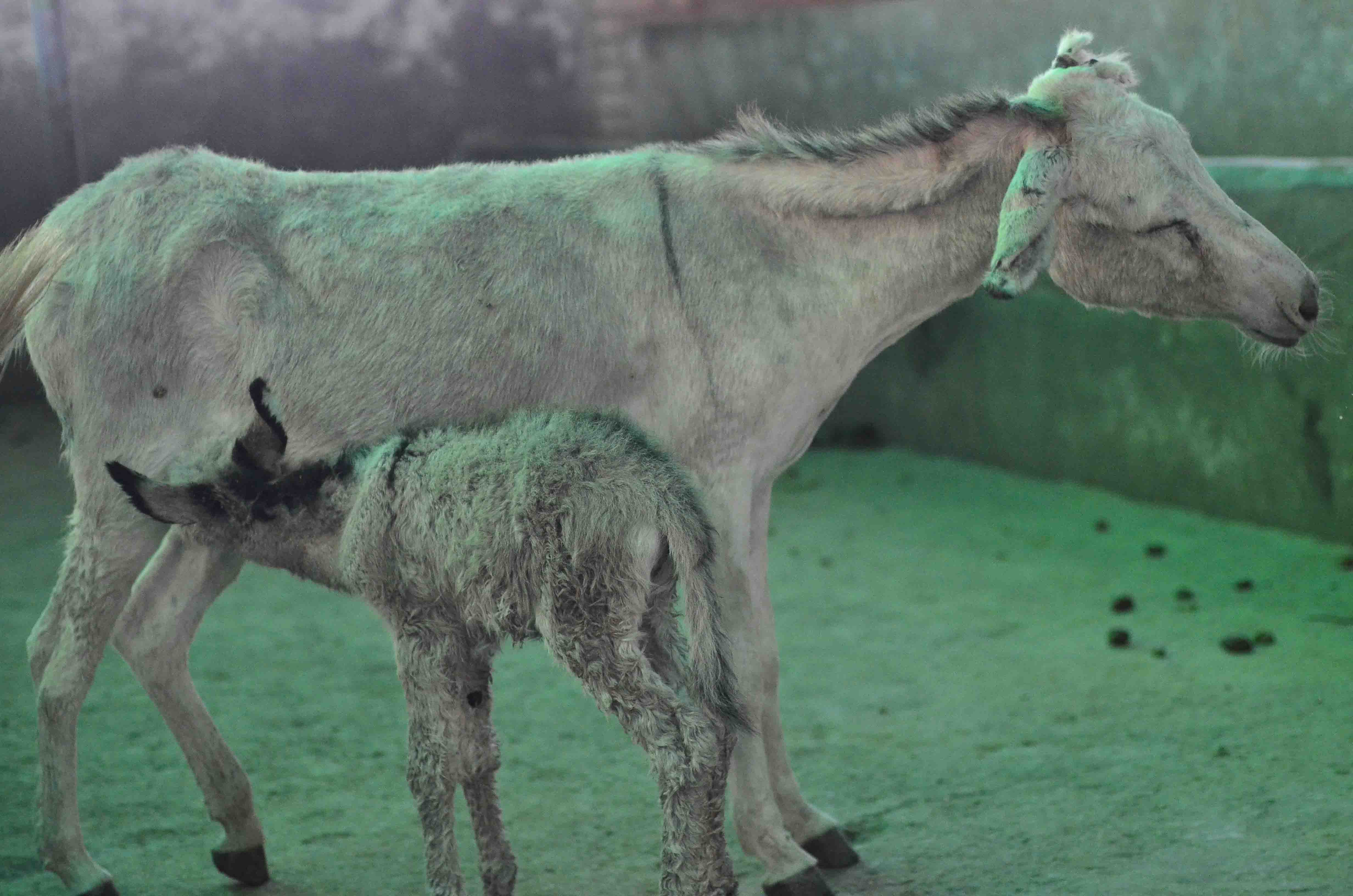 To add further pain to their existence, animals are whipped and yelled at to move faster or if they stumble or fall, whipped to stand up and keep going. At the end of their day of work, not even a decent meal or proper shelter awaits them as for some strange reason stable feeding of donkeys is not a practice and they are “left free to graze” on lands which barely have a mouthful of grass growing on it. Water is even harder to come by. This is the life of these working animals. 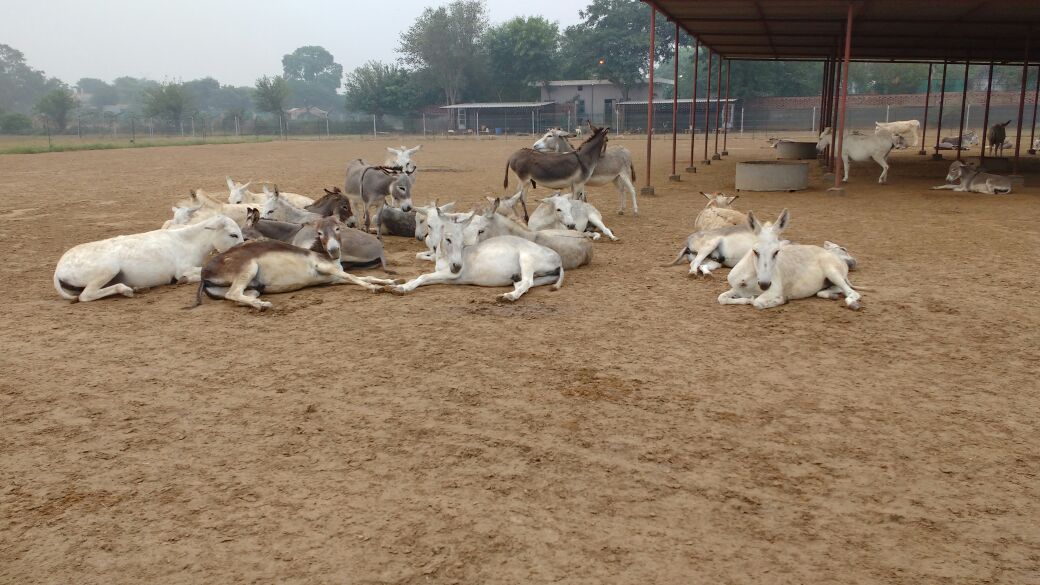 The Friendicoes mobile clinic which has been giving free medical aid and teaching the  rural equine owners the rudiments of animal care and welfare,  witnesses many animals with horrific saddle wounds, accident injuries and fractures due to overloading and overwork,  and health problems brought on by poor feed, dehydration and exhaustion. As a result, many equines are abandoned because they can no longer work and the average donkey owner cannot afford to nurse an animal through a prolonged illness or if it cannot earn for him. At the end of the day these are economic units to the owner and sentiments do not enter the picture. Currently the Friendicoes lifetime care Sanctuary houses over 61 such donkeys and mules, rescued from brick kilns after their owners have abandoned them. Another 21 have come in due to road accidents after wandering onto the highway. The mobile clinic has a punishing route through villages from Delhi to Agra and carries out de-worming, oral drenching, wound treatments, tetanus vaccinations, and handles caesareans as well as eye surgeries and surgeries to treat huge wounds and traffic injuries.  The mobile unit also and hands out keens [padding] and blankets to act as cushions when the animals have the bricks laden on their backs and Friendicoes has made over 9 water troughs at strategic places to provide water for all working equines and endeavours to ensure all animals in their care have access to water. 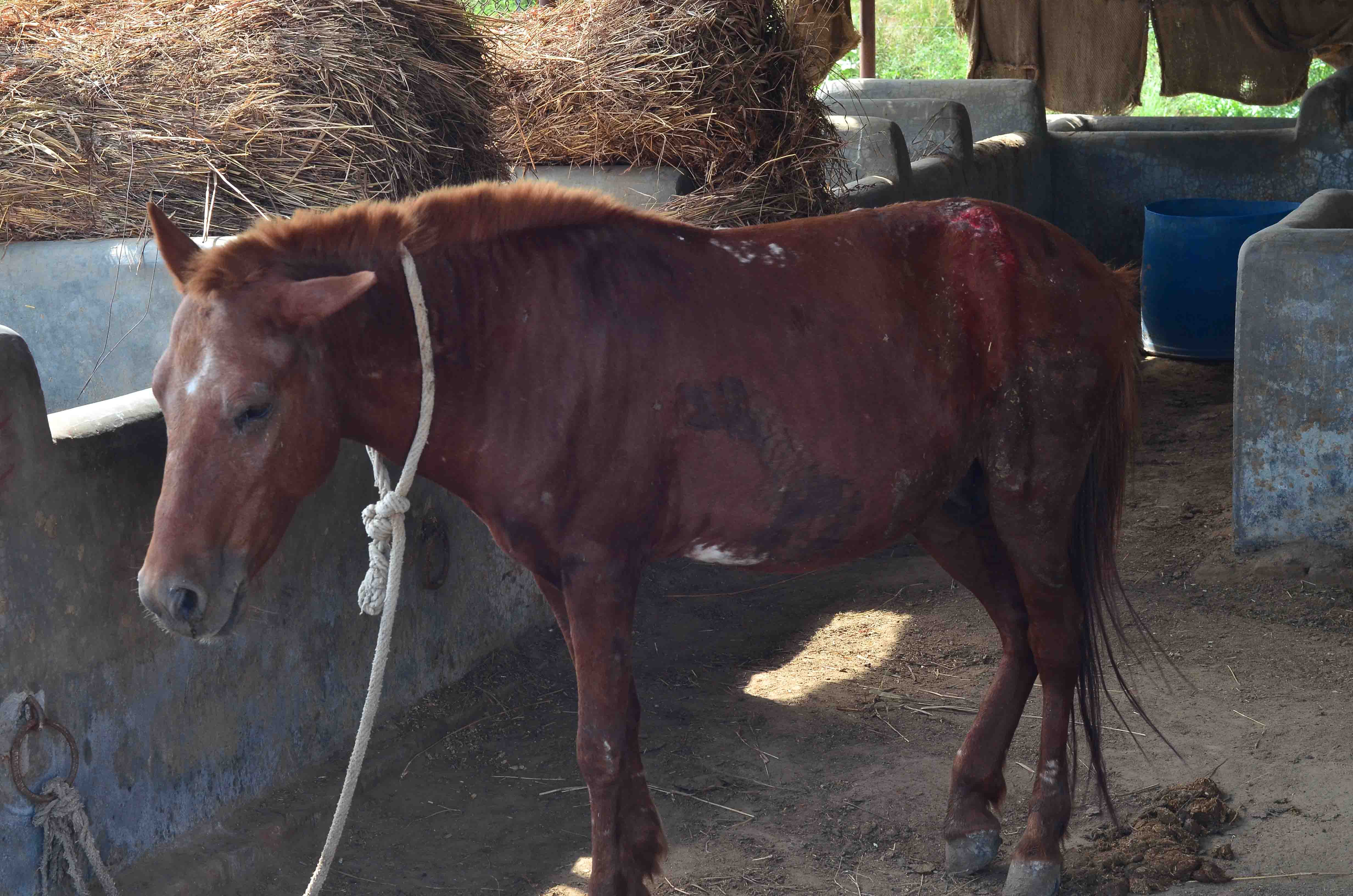 It was in all probability a pack animal, aged around 8-9 years, he came in with a serious saddle wound from all the heavy lifting without proper padding. 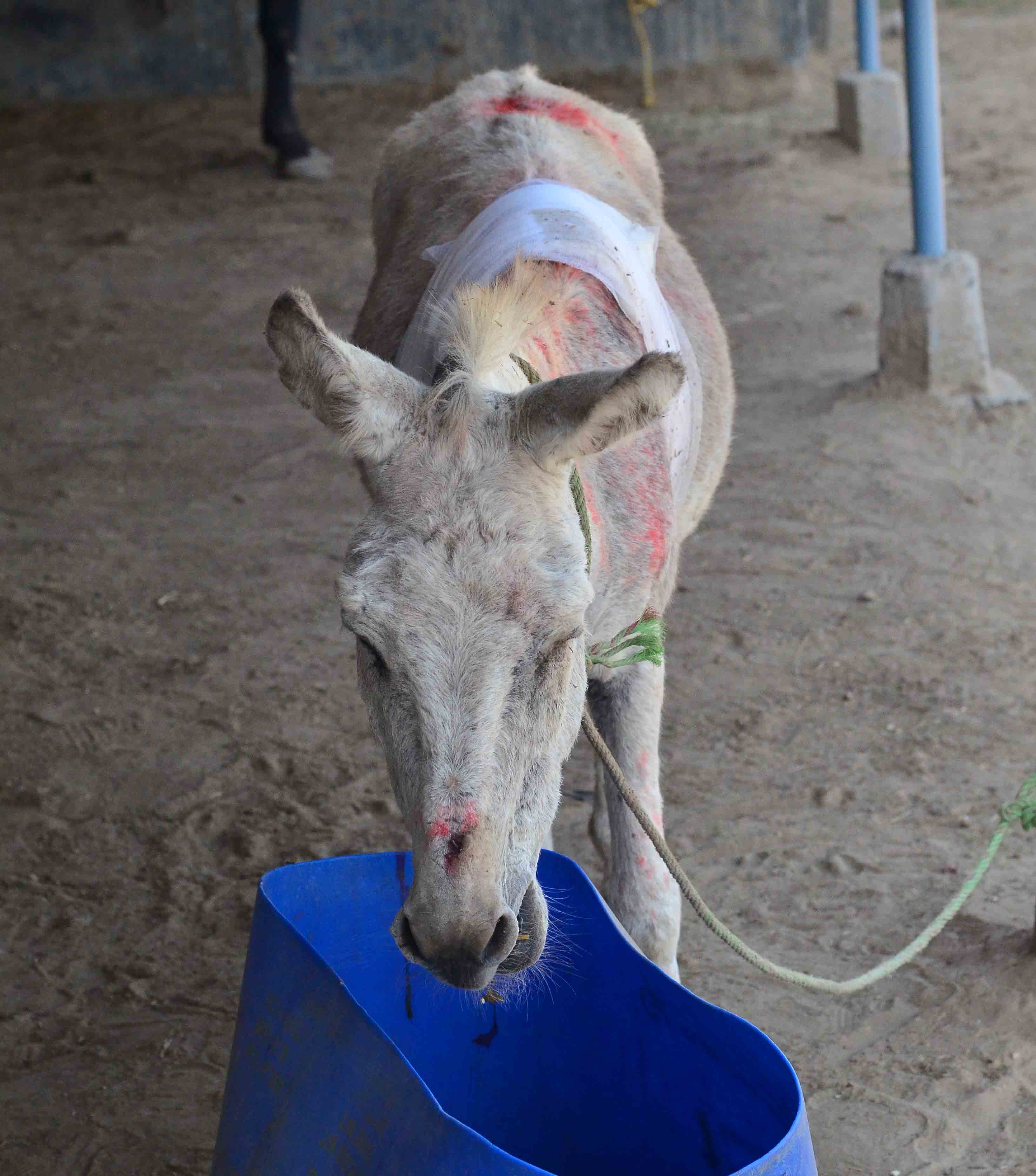 A victim of neglect, was dehydrated weak and incumbent, suffering from bed sores.

Both these fellows came in within a few days of each other, and are being fed a nourishing diet as well as having their wounds medically treated 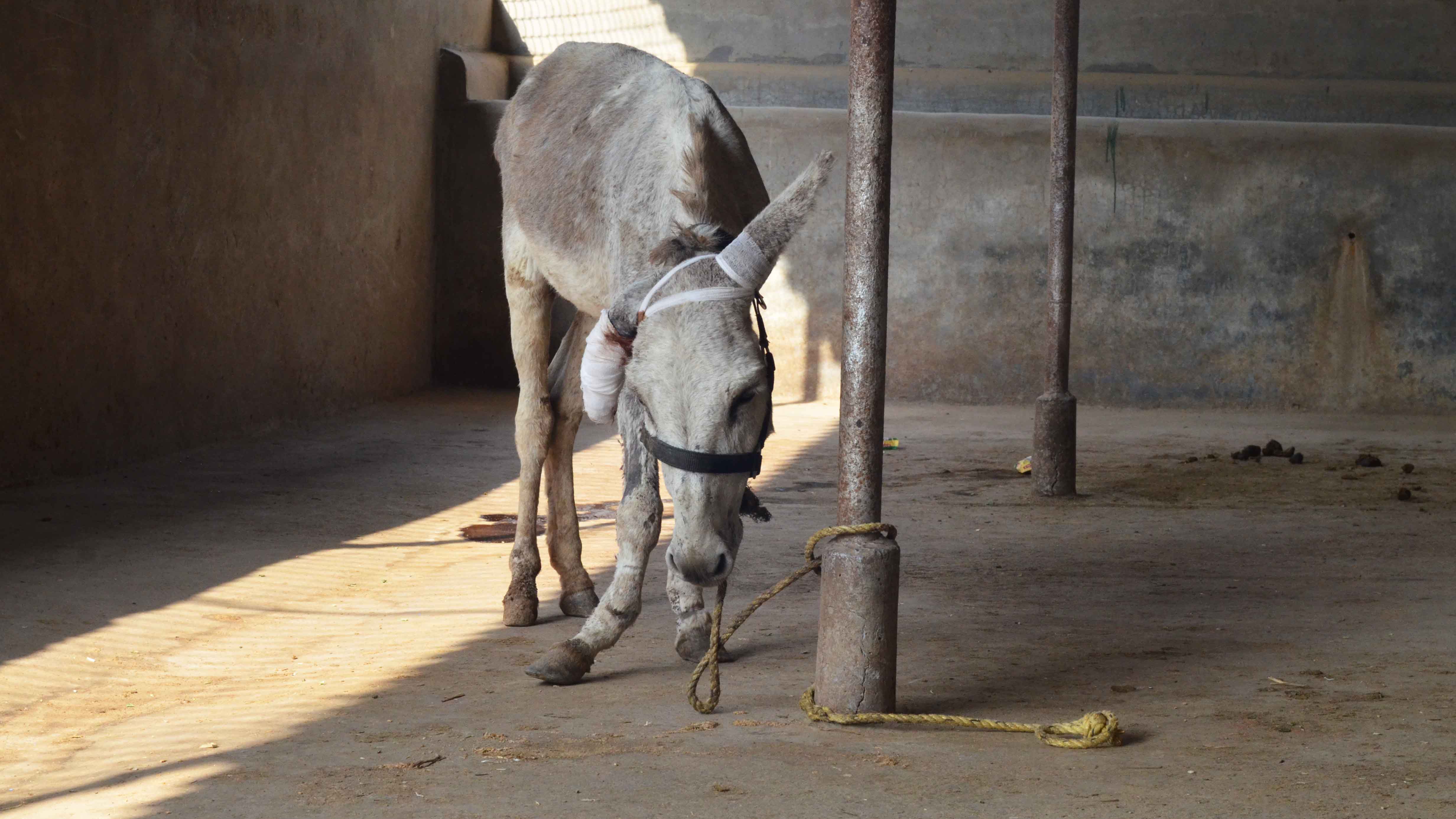 He came to us about 2 weeks ago, with a very severe ear bite from another animal, along with a badly united fracture in its leg. He seemed to have several old injuries that went untreated, broken bones joined incorrectly and an infection in the wound causing opacity in the eyes and partial blindness. However at the Sanctuary he has no longer to fear trauma or hunger and is recuperating nicely. 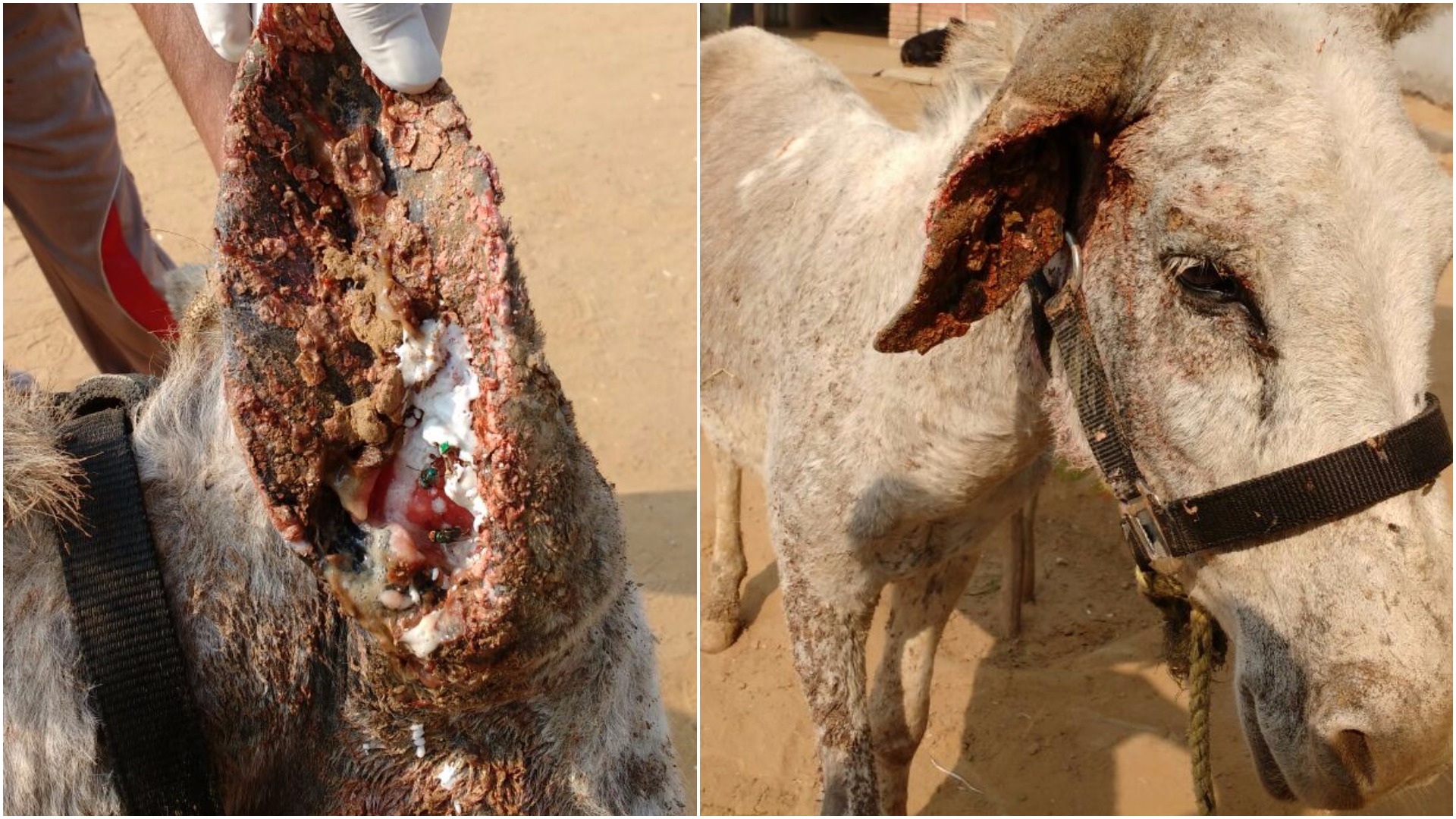 Donkeys are intelligent creatures, often mistakenly called stubborn and stupid; they are hardy surviving all mans cruelties and hence it is not deemed necessary to give them the same level of care as a pony or horse.  They are hard workers and excellent companions, but these beasts of burden are some of the most neglected in our country. Often associated with those living at or below subsistence levels, donkeys are the worst suffering and least talked about of working equines. Friendicoes has been dedicated to the cause of working equines since 1984 and against all odds hasn’t given up on its mission of bringing some measure of relief to these animals in rural India and to highlighting the need to treat them better. 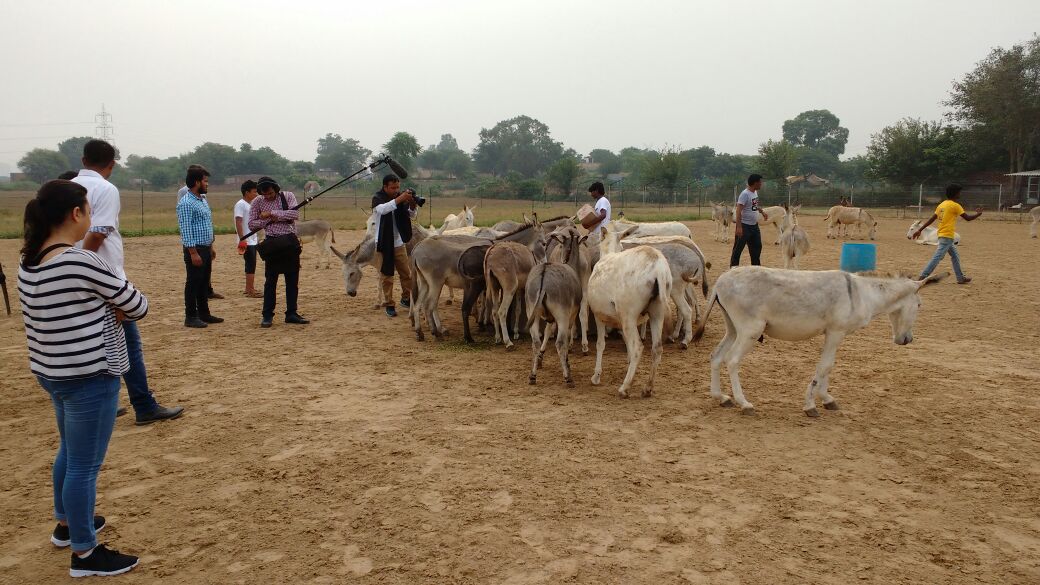 Of late however, these animals have been getting some long overdue attention. Banyan tree films (101india.com) https://www.youtube.com/watch?v=FNSTXjBtIBc recently covered these lovely animals at the Friendicoes sanctuary.