By the wayside – Friendicoes

Last month we introduced you to the equine team, our tireless soldiers who travel far and wide to provide care to and be the voice of working animals. Monday to Saturday they travel nearly 1500 kms and treat over 200 cases. But what happens on Sundays? Animal cruelty doesn’t take a break and rest on the Lord’s Day, and neither does Friendicoes.

Last Sunday, Friendicoes received a call from concerned citizens about 3 mules wandering by themselves on Mathura road; they were sans owner and meandering about in the middle of the road. Since the callers had only seen them in passing their exact location was hard to pin down, nevertheless, a team of rescuers set out to find these drifters up and down Mathura road and going down either way towards Jamia and Kalkaji. Alas, having searched high and low around the area they were reported to have been seen, the team returned empty handed, worry gnawing at their minds but resigned to the idea that perhaps the owner had been around or the mules had drifted off the open roads. 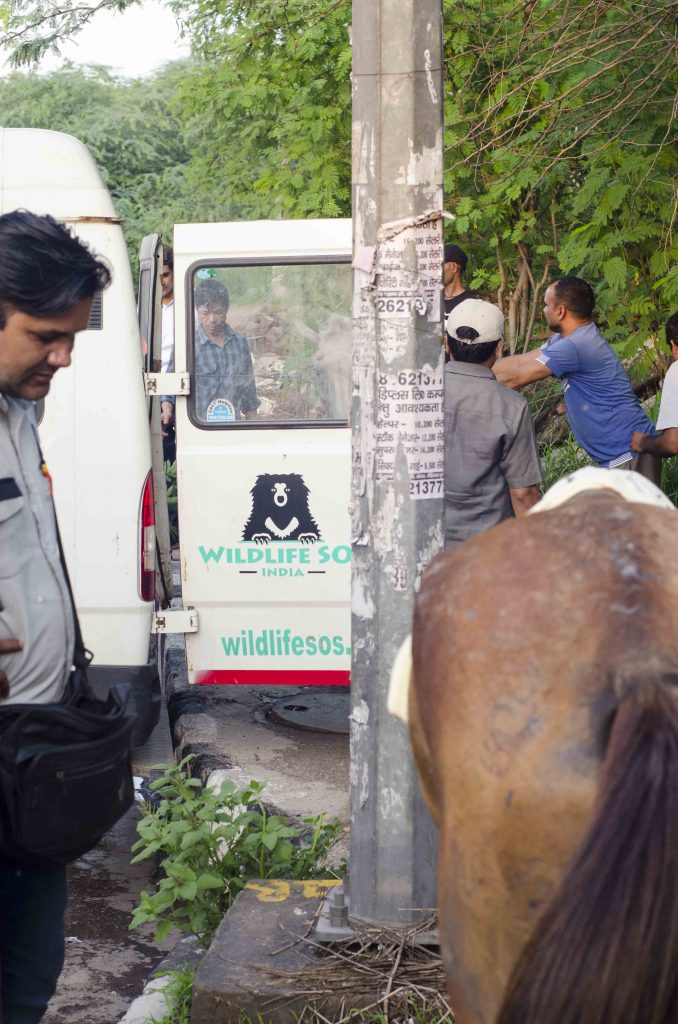 As the team returned to the shelter, we received another call from old friends Pankaj and Aparajita, they were calling in to let us know about a traffic jam on the Kalkaji mandir flyover, caused by three abandoned mules. One of them was seriously injured on the back and on the verge of fainting, Pankaj informed us and urged us to come as soon as possible, following up with calls every 5 mins in a state of worried panic. 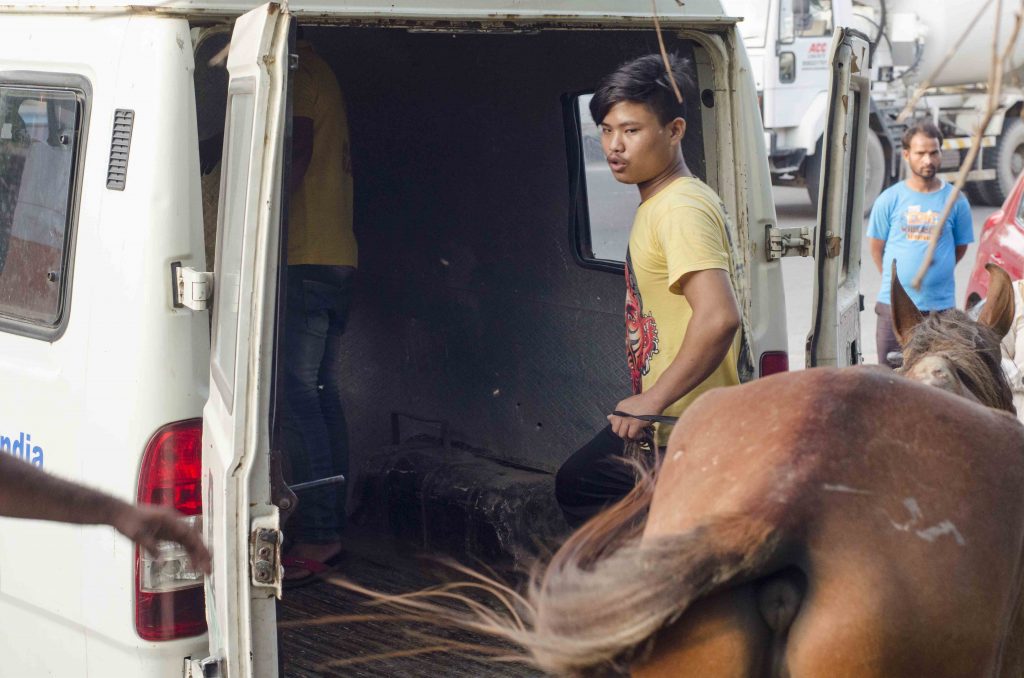 Friendicoes team arrived at the scene to discover Pankaj, Aparajita along with Sanya and her mother, both members of People for Animals, and another young man, helping the police divert traffic while the mules stood off to one corner looking attentively at the activity around them. They looked like they were abandoned by their owner, maybe because they are getting on in age or for whatever unknow reason. With help from the police and all of these wonderful volunteers the mules were led down the flyover and on to a footpath from where they were loaded on to the ambulance and sent off to the Friendicoes sanctuary in Gurgaon. The in house veterinary team have given them a complete health check and attended to the injured mule. And the trio are now gorging on healthy, nutritious meals and recuperating under the loving care of the team at the sanctuary. 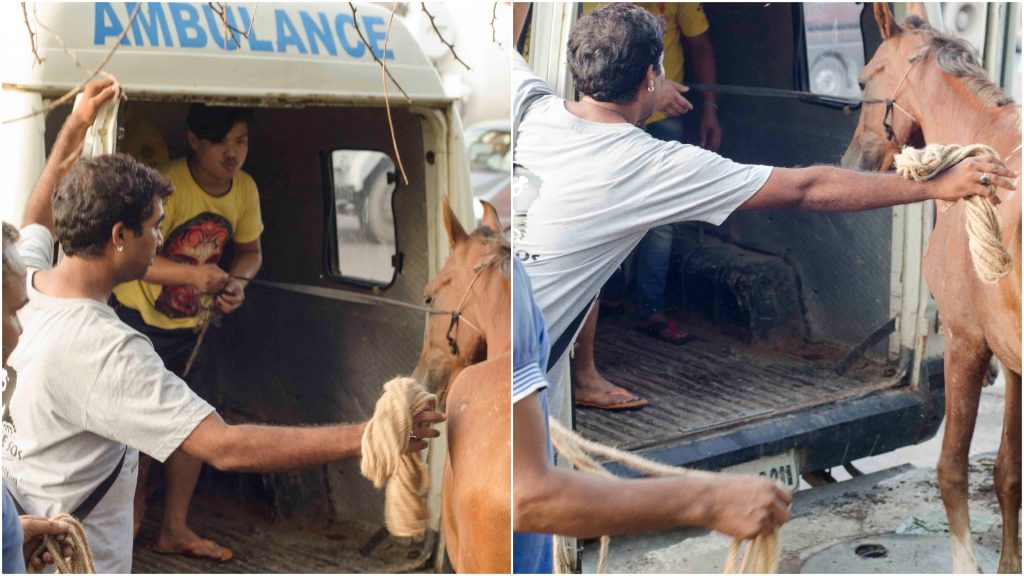 Mules are one of the most resilient animals, possessing the strength of a horse and the stamina of a donkey, and there is little they cannot do. We have no doubt that they will come out from this better, stronger and more beautiful in every way. It is for this very reason our job is a very rewarding one, to see poorly treated animals, being at their worst and then to witness them emerge better and brighter than ever before with a little care.

And it is people like Pankaj, Aparajita and Sanya that make it possible for us to do the things we do. Sanya and her mother stood there for three hours under the hot sun, trying to keep the animals safe from the traffic and keep them contained. “It was a relief when Aparajita and the cops came to help”, she said.  Without help from volunteers and animal lovers, our job would be so much harder and their support is what we are most grateful for. We hope this blogpost can encourage more people to pitch in and do their bit instead of passing on the onus and complaining. 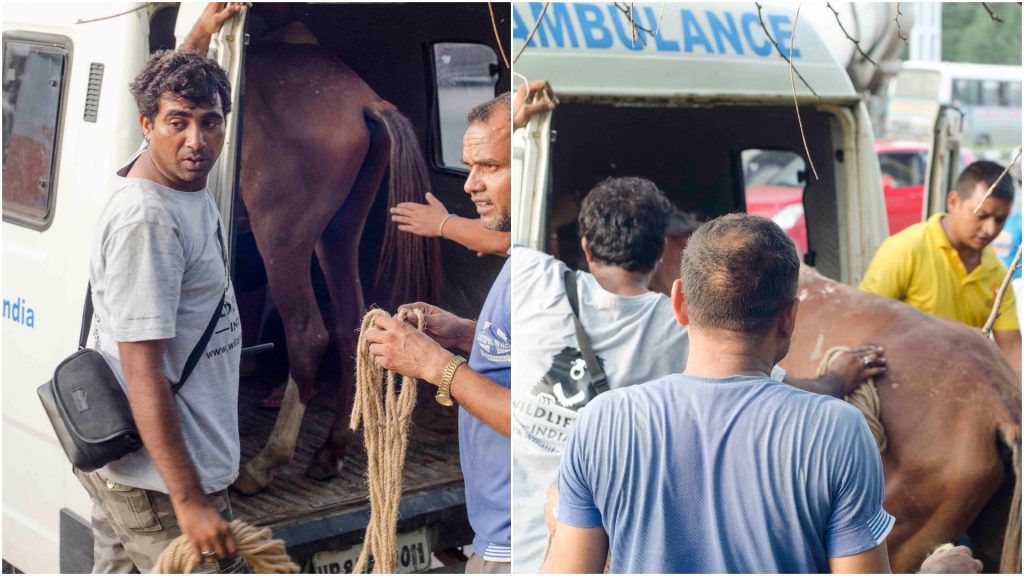